Records were made to be broken, but as we all know some records are the last ones you want to be the one to break.

Source: espn.go.com from an article in Bleacher Report at http://bleacherreport.com/multiple-sports

80 consecutive losses as a football team may be an embarrassing record to hold, but the record this administration broke in September 2014 is far worse than just embarrassing!

Wow!  This report is worse than last month’s, but it will be hard to break through the manic headlines to find the truth!

Occasionally we’ll need to remind readers that the jobs report number has been politicized.  Here’s a Forbes article that echoes Blue World’s analysis following a new BLS chief appointment and a fraudulent drop in unemployment to below 8% just before the 2012 election.  Cynical?  Absolutely, but not in this case.  The mathematical proof is in the BLS pudding.  Fewer jobs equals an improved unemployment rate, and more jobs has yielded a deterioration in the rate?  Not to mention that the number of new jobs published in those situations could NEVER cause an honest rate calculation to move that much.  How do they do it?  There are lots of tricks they can used to “cook” the headline numbers, but the truth is still hiding in the weeds.  Why is the truth allowed to survive in there?  We suspect it’s not because they can’t fudge the details.  We think it’s just because they figure so few pay attention to them that it doesn’t matter.  Unfortunately, they’re correct.   That’s why you, the astute manager and investor, follow us to know what’s really going on.  As Matt said on CBS Radio last month, the unemployment rate has lost all credibility as a proxy for the health of the labor market.  Here’s a link to the podcast of that show.  This month is no less a fraud on the managing, investing and voting public.  Let’s look at why that’s true…

248k new jobs.  Great!  Of those, however, only 236k are in the private sector which keeps us well below our 250k requirement to just break even on those becoming eligible to work each month.  The labor force lost almost 100k more members in September 2014 and those not in the labor force swelled by 315k.  Yes, 315k.  So, 236k new jobs…and 315k left the labor force.  See the fraud yet?

Without fully detailing a diffusion index, we’ll just say here that readings over 50 point to expansion and those under 50 show contraction.  Consider the uncomfortable three-month trend in the manufacturing sector’s diffusion index starting in July: 56.2, 54.9, and 51.9.  That’s not pretty.

All that would be bad enough, but there is one glaring statistic that you will see here and from very few other responsible analysts…the participation rate.  Ladies and gentleman, the available, eligible labor force for the United States of America has set a NEW RECOVERY RECORD LOW PARTICIPATION RATE in September of 2014!  For those of you keeping score, that’s 5 years, 3 months into a “RECOVERY!”  The participation rate has fallen to 62.7%, a level not seen since 1978.  The sad chart is included below. 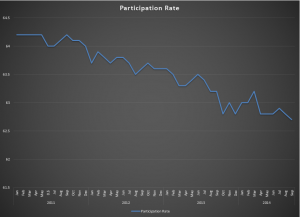 We say ignorance is curable but stupid is forever.  So let’s leave ignorance out of the equation and focus on stupid, then ask what’s worse; stupid or dishonest?  We say “stupid AND dishonest!”  The participation rate is low because baby boomers have done so well that they can afford to retire early especially since they have access to affordable healthcare under Obamacare?!!?  We’re not kidding!  You have to go and read the comments under this article from Business Insider.  It is UNBELIEVABLE!  Sometimes calling someone “stupid” is an insult…to stupid people.

Business owners, managers and investors everywhere need to be aware of the realities of this economy.  Our governmental leaders are out there telling us the economy is fine and improving.  They tell us their policies are working and we are just too ignorant to see it.  Believing this rhetoric is nothing short of dangerous to our economic health!

So, as always, thanks for reading, keep the defense on the field, and for management and investment sake please, stay tuned…