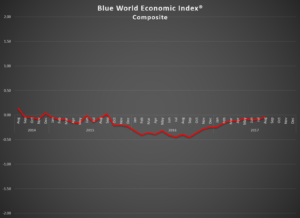 “Objective Signs of Life” is the theme for August 2017, according to the Blue World Economic Index® as we moved a full .05 from -.09 to -.04! After a rather slow start to the month things really started to heat up fast. Inflation and Real Estate were the only real drags on the index for August, especially Housing Starts and Permits, which suffered an oversized and uncomfortable swing from 1 to -.5 on the 16th. That kind of move is rare. Industrial Production ended a streak of positive hard data in Manufacturing, but at least it was the exception not the rule and maybe a blip, as the Philly Fed report is still in high orbit. That brings us the Chicago Fed National Activity Index, which took an unexpected drop considering the strength of every other regional Fed report in the month. Ultimately, four out of six hard data reports in Manufacturing were positive for August so the unbridled optimism of the last nine months may finally be translating to objective improvement. We’ll have to see if it holds.

Five out of the Eight Major Categories remained flat or gained ground including Consumer, Employment, General Measures, Manufacturing and Retail. Employment was the big winner in this group gaining an eye-popping .31. The Retail bump (.29) has to be viewed with some caution as conflicting reports are pulled up by reports that are often contrarian and/or volatile. Inflation and Services lost fractionally, and Real Estate led the decliners by losing a full .2.

Tomorrow is jobs report Friday, and our report is expected out before Noon Eastern. We’ll see you back here at the close of September and hope to report another move to the North.

Have a safe and wonderful Labor Day!