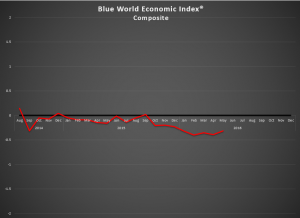 Apologies for the delay. We experienced a connectivity failure yesterday. The numbers recounted below reflect the close of the month of May 2016 with Farm Prices, a component of the Inflation category, being the last to report on 5/31/16 at 2:00pm CDT.

Less negative is the best that can be said for the U.S. economy according to the Blue World Economic Index® for May 2016 which came in at -.32, .07 better than April ‘16’s -.39. Compared to how the month started that is a bit of a relief.

Of the eight major categories, six checked in with below zero readings which is one worse than April as Services joined the underwater group. Of the five categories previously in negative territory Employment and Manufacturing deteriorated, General Measures, Inflation, and Retail improved while Real Estate and Consumer Measures padded their plus side showings. That represents a really nice recovery for the Consumer category as the first half of the month did not look good. The biggest concerns are the continued fall in Manufacturing even in energy dependent Fed regions despite increasing oil prices and a drop to negative for Services which had been the cornerstone of strength for the index. Due to the big tallies by Real Estate and Consumers, a record-setting low was happily avoided.

We maintain “hope” is not a responsible strategy for managing any business much less the economy but considering the policies in place and those being contemplated we have no choice but to hope those month-saving numbers represent a bounce, not a blip.

Don’t miss the Blue World Jobs Report Analysis out this Friday and may your June be a profitable June. We’ll do everything we can to help!