Well, they are getting REALLY tricky over there at the BLS.  This one is so good the Wall Street “experts” may not catch on this time.  We, and others, have been pointing out that the “improvement” in the labor market has been a numbers trick and not a true expansion in jobs.  That’s because the number of employed people has been rising but the number of those in the labor force has been declining.  As much as we hate to be so cynical (but not really) they seem to have noticed that we noticed.  So, this month the labor force size increased (.3%).  The problem: the number of employed people increased at double the rate (.6%).  As the chart below demonstrates, that makes the spread between the size of the labor force and the number of unemployed smaller, hence, a lower unemployment rate.  That could still be good news except for a few of those pesky details… 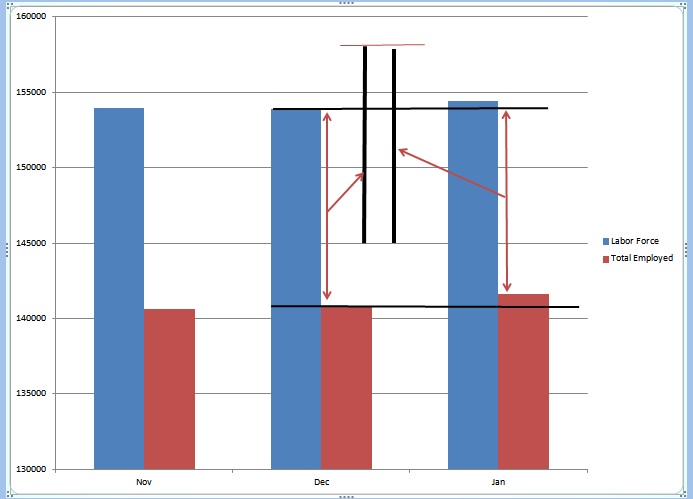 First, January is the month when updated population controls are introduced.  That is why they don’t show the change in Household Data from December to January.  There appears to be some “discretion” in those population controls.

The BLS summary reports widespread gains including professional and business services even though the unemployment rate for those with a Bachelor’s degree, or higher increased!  There were also increases in the number of:

The work week and overtime hours in manufacturing remain in a narrow range that does not support a case for increasing demand or an improving labor market.

Headlines are headlines.  Spin is spin and data is data.  We continue to urge caution in business and personal investing especially as the attempt to characterize underwhelming data in a positive way appears to be increasingly aggressive.