Here are the key metric graphs reflecting the annual data with revisions and including the full years of 2011 – 2014.  Revisions were minor and did not alter any of the poor short or long term trends reflected.

Starting at top, left we have the size of the labor charted against the total number of those employed.  We can see as the lines converge the unemployment rate calculation will become smaller even though there is no improvement in the labor force.  This point is validated moving to the right and then below, left showing the participation rate and the number of those no longer in the labor force.  The fact that the graph showing those no longer in the force is rising faster than the total employed line is very unsettling and not recovery-esque. Finally at below, right we see the length of the work week showing a very narrow average over the period. 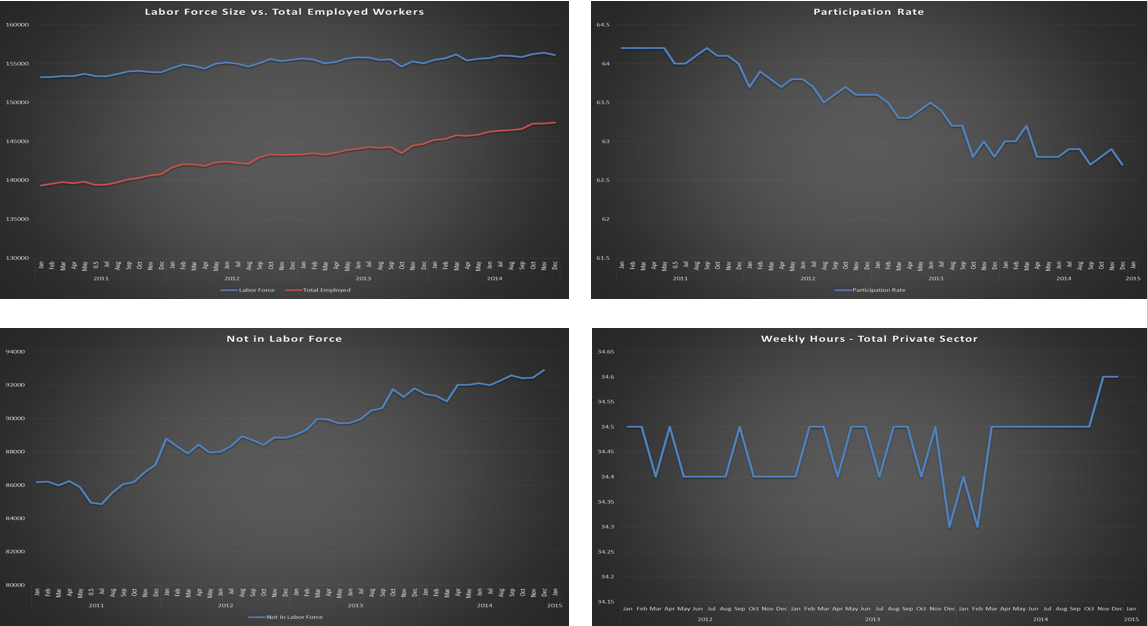 Do you hear us, AND ARE YOU LISTENING?!?

Happy New Year everyone!  We hope the Christmas season was safe and joyous.  Now, back to business.  The jobs report is out and we’ll comment on it as usual but we will also offer a bit broader overview of how the economy fared in general for the period of 2011 – 2014.  We think you’ll find it rather sobering as we did.

First, the jobs report.  Same ‘ole theme of a decent number of new jobs with the private sector breakout sporting a little less luster than the headline number, which came in at 252k, 12k more than the private sector total.  The labor force shrank by another quarter million plus so, as has been the pattern, the number of those employed grew at a faster rate, further enhancing the irrelevance of the unemployment rate calculation.  The “Not in Labor Force” tally swelled by another half million driving the Participation Rate to equal its “recovery” record low.  There were corresponding spikes in the “Marginally Attached” and “Discouraged Workers” yielding a true unemployment rate just north of 11% which is, of course, also optimistic for the same reasons as the headline number.  Wages across the board, and notably in construction and manufacturing, took a noticeable hit with some downward revisions to previous periods.  The work-week length remained stagnant, BUT there may be a brightening spot.  The overtime hours in manufacturing has demonstrated small but nevertheless consistent increases for the 4th quarter.  Let’s hope that holds.

Annual revisions to the prior data will be showing up beginning next month so graphs may look a little hinky as they can at each New Year, but the patterns will be valid.  Here are some sobering statistics.

Percent Change for the period:

This shows quite clearly why we say the unemployment rate as published has lost all credibility and value as a proxy for the health of the labor market and economy at large.

Speaking of the economy at large, well, it’s not declining, but it’s not advancing either.  Blue World tracks over 40 reports per month from both private and public sources in the following 8 categories:

Of those, in 2014 five categories were in mild positive territory as analyzed internally at Blue World, and three were slightly negative.  All told, this is still an economy waiting for a direction.  We have repeated the sentiment that policy matters, and it is no secret that we have been very critical of the ones in place.  We don’t care what works, just that it works…and these don’t.  We voters expressed a desire for policy change, and our new hires will take office this month.  Let’s pray they’re listening.