The Blue World Economic Index® gives the business manager a quick and easy way to understand the current state of the economy as viewed through the eyes of other business owners, managers, and entrepreneurs as opposed to those of economists, brokerages or politicians.

The index follows over 50 economic releases each month from private and governmental sources.  It accounts for the current report, the recent trend and the longer term trend.  A discretionary value is assigned and the value calculated.  The report values for each of the 8 major categories are distilled into a category composite which are then combined to yield the overall composite.

The index is a rolling data format and typically updated daily.

The index range is -2 to +2 where -2 suggests a very a weak, declining, recessionary economy and +2 suggests a robust and growing economy with 0 suggesting a flat, sluggish economy.

Back to Blue World Economic Index®

The Blue World Economic Index dipped more negative in July ’15 continuing its meander around zero.  4 out of the 8 major categories were in the negative including Employment, Inflation, Manufacturing, and surprisingly Real Estate with Employment being the weakest at – .93.  Consumer measures lead the plus column at .38, but that is down a sizable .36 from last month.  General measures, Retail, and Services were also fractionally positive.

The Blue World Jobs Report Analysis will be out next Friday. 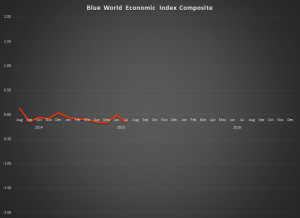 Policy matters, and these don’t work…unless the goal is to continually weaken the American economy.  We need to wake up and realize that 93 million Americans out of work with fewer than 63% of available workers actually participating in the job markets is NOT A RECOVERY!

Last month we were full of optimism and excitement because the report was mixed.  Today…not mixed.  We can’t even say we’re just 0 for June because all the good numbers from April and May were revised down.  June of 2015 has proven to be a blood bath.  Want evidence?…the report is so bad the markets can’t even get excited that a rate hike has just been pushed back yet again.  Just for the record, Matt was about the only voice predicting there would be no rate hike in June when he was on CBS radio in Chicago for the May report.

Usually we need to dive into the deep end of the data pool to find the true weakness in the report, but today all we have to do is wade into the kiddie section.

Now, all that is bad but can be summed up by the stat that takes center stage this month.  The participation rate had set and been hovering around an all-time “recovery” low of 62.8%.  June of 2015 saw that floor breached setting a new low of 62.6%.  The chart is included.

There were 223k net new hires and that is the total private sector as government payrolls ended the month even.  While below the consensus it is still over 200k which is generally respectable BUT…as we said above, downward revisions totaled negative 60k over the last two months, the work week was stagnant again, wages were flat and actually pulled back .3% to an even +2% for the year.

Is there more weak data in the tables to report?  Yes, but we’ve had enough for one day.