The index is on the move…but still betting on the come! Overall, the composite improved by .08, moving from -.25 to -.16, a healthy jump. Six of the eight major categories are still running in the negative, but six of the eight also improved in February.

From a hundred thousand feet conditions appear to be improving, but the charge is clearly being led by the surveys of anticipation as opposed to the hard data. Is that ok? Of course! As we’ve said, no optimism, no recovery. But the delta is rather striking and nowhere more than in Manufacturing. That category follows twelve reports each month. Six of them make up the Regional Fed Manufacturing Districts sub-group survey reports. The hard manufacturing data actually slipped in February, but the Fed sub-group jumped by .17 to post a +.2! That says managers are optimistic that things are going to pick up rather quickly. Let’s hope it develops that way.

Policy matters, and in fact, anticipation of policy matters. The prospective changes that are being advertised have the general business community and the consumer in a very giddy mood, but we caution it is still just a good mood driven by optimism, so be excited, but don’t bet the farm until the hard data establishes a verifiable trend. The way it’s looking, we still believe that could show early signs before year end.

The Employment Situation Report is scheduled for release on Friday, March 10.  That may delay The Blue World Jobs Report Analysis until Monday the 13th, but if that’s the case it will incorporate the Labor Market Conditions Index analysis so there will be a little more meat on the bone.

Have a great month!

OOHHH, WHAT A SURPRISE!

… but not for the reasons the “experts” think. We’ll explain.

This White House seems to be working fast, but nobody’s that fast. In other words, don’t look for this to anchor a gigantic new trend quite yet. The real surprises for those who invest real money, manage real businesses, and employ real people are in the details. We’ll point them out.

To start, the total Unemployed grew by more than the total Labor Force, but both were positive numbers and widened the spread, so the Unemployment Rate (who cares) ticked up and that was a good sign in this case. As we’ve said, the Unemployment Rate is no longer a reliable proxy for the actual health of the Labor Market. The Participation Rate ticked up .2% to 62.9%. That is still horrible, BUT… that stat usually moves .1% at a time. When we’ve seen bigger moves they have typically been in the wrong direction, so a .2% move to the North is a welcome departure.

The real surprises? OK. We always point out the headline number is never the one we care about because it includes both Private Sector and Government hires. We only care about the Private Sector when analyzing the economy, and we have been accustomed to writing about the Private Sector totals being lower that than the headline tally. If you’re new to this report or just missed last month, we describe this in some detail here. The three-month revisions to the Private Sector numbers netted us plus 1k jobs. The Private Sector net total for January was 237k, 10k higher than the 227k headline, because the Government shrank its workforce by 10k. That’s before the hiring freeze was completely in effect. Another surprise was the accuracy of the ADP report. Their number was only 9k off of today’s BLS. Believe us, that is a surprise. The counting methods of the two reports are so different that the ADP report usually gives a hint of direction but not such tight agreement in totals. The really big news, however, is with regard to the Not in Labor Force totals. For the last two months we have been over the 95M mark, and that is staggering. Remember, these people are not counted as “unemployed” in calculating the Unemployment Rate because they have not looked for work recently. This is why we hear people talk about the true unemployment rate, which is still double digit, if we include the NILF in the unemployed count. That number fell by three-quarters of a million people last month! We don’t recall that kind of a drop in a single month. That number is confirmatory of several important indicators. First, it validates the big jump in the Participation Rate as non-participants are re-entering the labor market. Why? Because, suddenly, they have renewed optimism that jobs will be available. This is also confirmatory of the Consumer and business outlook metrics followed by the Blue World Economic Index®, all of which cite positive outlooks by consumers to find work and businesses to offer work.

No positive change was ever precipitated by pessimism, as demonstrated in the last eight years. We do not make political statements through these reports. We don’t care what works, as long as it works. And by “works” we mean policy creates an environment conducive to economic expansion through private sector enterprise growth. Period.

All that said, don’t get crazy. This is just one report, a single data point. Unto itself it means virtually nothing. Policy needs to be implemented as advertised, have a chance to bear fruit, and adjustments made if needed. That takes time. We estimate Q3 before we have the earliest pattern indications of what this will all mean so hang in there and we’ll see you back here at month’s end for the Blue World Economic Index® report. 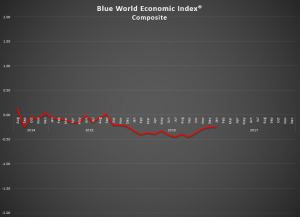 The BWEI® was flat at -.25 to the December 2016 reading, but there was news in the detail, the biggest of which was in Manufacturing. While the overall reading was flat, a win unto itself these days, the Fed sub-group, made up of five regional Fed Districts plus the Chicago National Activity Index, made a big move to the North breaking above zero to a plus .3. That’s huge and, hopefully, heralds the beginning of movement for the whole category. The other up-movers of the eight major categories included Consumer, Inflation, Real Estate, and Services, while Employment, General Measures and Retail slipped.

There is no longer any doubt that the election is driving the positive movement in Consumer measures as well as optimistic business outlooks as surveyed by the various relevant reports. Let’s hope that optimism is rewarded with some movement in the hard data. We’ll have to be patient. It depends on the implementation of executive policy change, speed of legislation, reaction time, and follow-through. Based on what we see so far, we don’t expect to enjoy any meaningful trend analysis for the headliner numbers of the monthly and quarterly reports until about Q3. In the meantime, the ones to watch will be the weekly releases on Consumer measures and the outlook components of the monthly business surveys. If the optimism holds and grows then the hard data should follow along. Here’s to hoping it materializes just that way!

As always, thanks for stopping by.

The Blue World Jobs Report Analysis will be out Friday morning. See you then.