What can we tell you?  Same ole’, same ‘ole…but we are not blind to the fact that that, in and of itself, it is a slight improvement even if for just one month.  We have had many reports over the last several years that were of the copy-and-paste sort, and then we’ve had those that fell well short of copy-and-paste by virtue of the detail exposing the truth about how bad it was in spite of the headline numbers.  That might cause copy-and-paste to become a bit of a relief.  But let’s be honest, this is not a “good” report, the labor market is not improving, and this is not a “recovery.”

The headline says 214k new hires, but the number we care about, the private sector, only added 206k.  Last month we pointed out the Not in Labor Force number was growing faster than the number of new jobs created each month.  Some of our “expert” critics are already elbowing us (electronically) this morning about the 206k drop in that stat.  Ya know how we keep sayin’ trends and comparisons matter a lot more than data points?  Maybe we can teach those “experts” something here.  True, the number did drop by 206k, but in spite of that there are still 622k more than there were in October of 2013!!  We know our readers get it, but the experts need pictures so we’ll put in the graph later.  For now, here is some perspective.

The 2% growth in the labor force vs. the 6% growth in employed people further illustrates why the unemployment rate, as published, is invalid as an economic metric, as well as both being pathetic for a three year period in the United States of America economy!.  The work week and manufacturing overtime remain flat, the participation rate is still languishing in record low territory, those unemployed with a Bachelor’s degree or higher ticked up, and meaningful wage growth remains absent.  Here’s that Not in the Labor Force graph with the labor force vs employed thrown in for good measure. 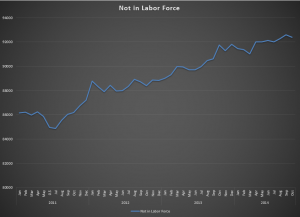 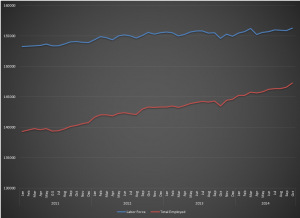 Maybe a cubicle-based “expert” can look at 92 million Americans (or whatever) out of work and see a “recovery,” but for those of us insophisticates who just own or manage businesses, invest real money, employ real people and make decisions that actually affect the economy, well, let’s just say “we don’t see a recovery.”

How many times can we say it; policy matters and these aren’t working.  Do we have some optimism that the election results from 11/04/2014 can lead to some more effective policies?  Yes, but remember, Washington is full of “EXPERTS!”